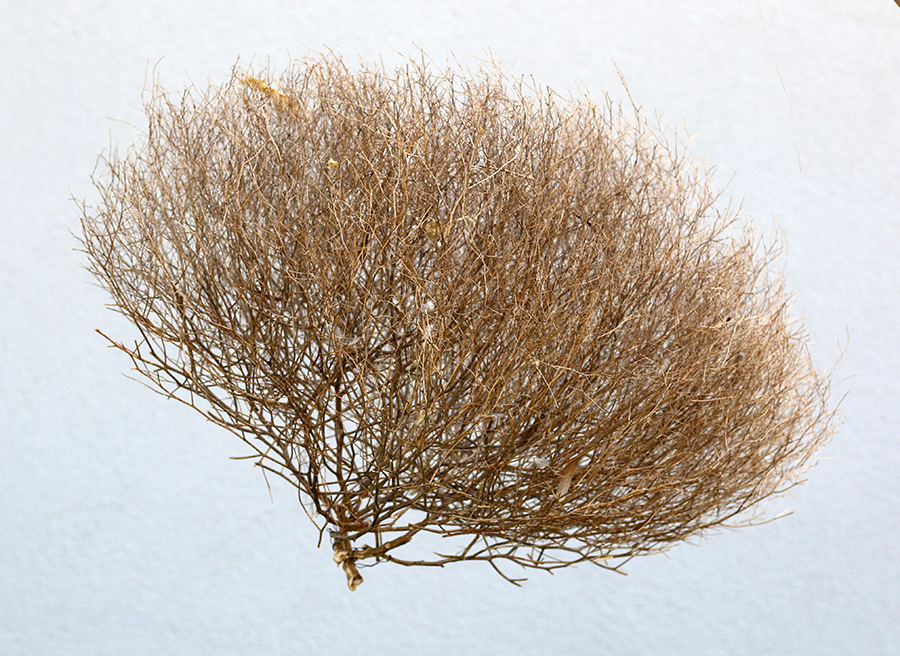 Is not impermanence the very fragrance of our days?
– From the poem ‘Wild Love’ by Rainer Maria Rilke, translated by philosopher of ecology Joanna Macy

Tumbleweeds are the iconic North American loners. These opportunistic agricultural weeds have rooted themselves in memories of many who grew up watching Westerns. Many tumble species trace ecological narratives of native inhabitants vs. non-native invaders and might be the perfect poster-boys as passive figures in an actively human drama in this moment of eremocene, the age of loneliness.

These bumbling loners sometimes gather in great numbers; ‘Hairy panic’ (Panicum effusum) can engulf whole neighbourhoods in seed heads several meters deep. From a positive point of view, most tumblers are well rounded and easygoing with a good bounce, causing only occasional havoc near obstacles.

Is it possible to make our way through spaces with as much detachment as tumbleweeds? In the way author Robin Wall Kimmerer refers to ‘polishing the art of seeing’, Ikonen would like the visitors to The Yard to sharpen their focus on both human and non-human passers-by and see migration as an active ongoing process. She invites the neighbourhood to contribute to the exhibit by dropping off tumble weeds to the installation site from the surrounding area. Submission of any size, shape or tumbleweed plant group will be accepted 24/7. The piece will be exhibited behind a minor fence inside of which the weeds will be free to roam the site for the duration of the show.

RIITTA IKONEN (b.1981, Finland) completed her BA at the University of Brighton and MA at the Royal College of Art, London. Her work threads memory, myth and imagination with a sharp focus on the natural world. She uses performance, video, wearable sculptures and photographic portraiture to investigate the various ways humanity occupies and interprets its environment. Ikonen has been awarded artist residencies at Shandaken, Recess (at Pioneer Works), the Bemis Center of Contemporary Art, and the Lower Manhattan Cultural Council (SPARC) in New York. In 2014 she was nominated for Finland’s biggest contemporary art prize Ars Fennica. She is the founder of the Mail Art gallery, located in a P.O. Box in the Rockaways, NY.